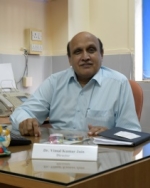 Dr. Vimal Kumar Jain took over as the Director of UM-DAE Centre for Excellence in Basic Sciences on 18th October 2017 (AN)`

CEBS was set up by the Department of Atomic Energy and the University of Mumbai in 2007. CEBS offers a 5 year integrated MSc program in Basic Sciences, with undergraduate teaching embedded in a postgraduate and research environment, for students who have completed 10+2 schooling or its equivalent.